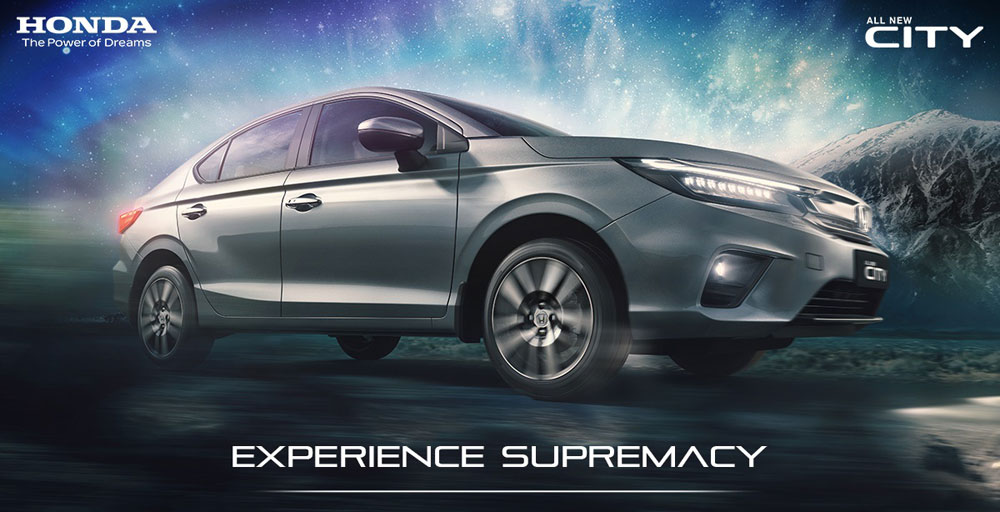 Since its first launch in 1998, Honda City has always been the benchmark setter of class. It was received with a big heart by the market then, and it is received with much fanfare even when its 5th generation model is launched after 22 years – the new Honda City 2020.

Starting from a price of Rs 10.90 lakh (ex-showroom, Delhi), the New Honda City 2020 is the third car launch of Honda in July. The first two being 2020 Honda WR-V facelift and the Honda Civic BS6 diesel. But undoubtedly, City was the launch that was awaited most by the market. In its fifth-generation avatar, Honda City is ready to take on Hyundai Verna, Maruti Suzuki Ciaz, Toyota Yaris, and Volkswagen Vento. But can it, really?

‘New’ is not just a word in the Honda City 2020. It includes a whole lot of new features and looks.

Talking about the looks part first, the four-wheeler will be equipped with a bold chrome outline and series of LEDs for its automatic headlamps (notably, first in its segment), Z-shaped 3D warp around LED lamps, daytime running lamps, auto-folding door mirrors and R16 Diamond Cut alloy wheels. The one feature that adds the most to its ‘rush for supremacy’ tagline is its beautiful one-touch electric sunroof.

Its interior includes engine on/off button, multi-functional steering wheel, and a sleek-looking minimalist dashboard with a matt chrome line. A mixture of leather and wood is inserted into the cabin to give you a luxurious feel. Though, one might not like the kind of plastic Honda has used to make a dashboard.

The Japanese car manufacturer has given us two engine options. First is the 1.5-liter four-cylinder petrol motor which is capable of developing maximum power of 119bhp of max power and a maximum torque of 145Nm. The petrol variant comes in two variants- manual gearbox and CVT automatic.

The second option is the 1.5-liter turbocharged four-cylinder diesel engine that can produce 99bhp of maximum power and 200Nm of highest torque.

Coming to the most important yet most undermined part – safety – the new Honda City 2020 has got six airbags, VSA and HSA, and tire pressure monitoring.

If you are a person with a family, Honda has also taken care of you. The four-wheeler comes with an ISOFIX child seat anchor that makes the car safer not just for adults, but also for children. Not to mention, it has also got EBD and brake assist.

Notably, it will co-exist with the still existing Honda City in the market. But, that doesn’t make it any lesser important. In fact, if there is any sedan in the market of price range 10-15 lakhs, that is running very far ahead of its rivals, it is only the New Honda City.

The fifth-generation avatar is priced between Rs 10.90 lakh and Rs 14.65 lakh (ex-showroom). Here’s your full list of prices:

To buy or not to buy, is, of course, your choice. But we can say that if you’re considering spending your hard-earned money on this new class-benchmark, it is not going to disappoint you.

Liked What You Read? Keep Reading Newzontips To Get The Latest Updates On The World Of Wheels.

OnePlus Nord: Pretty much everything you could ask for..