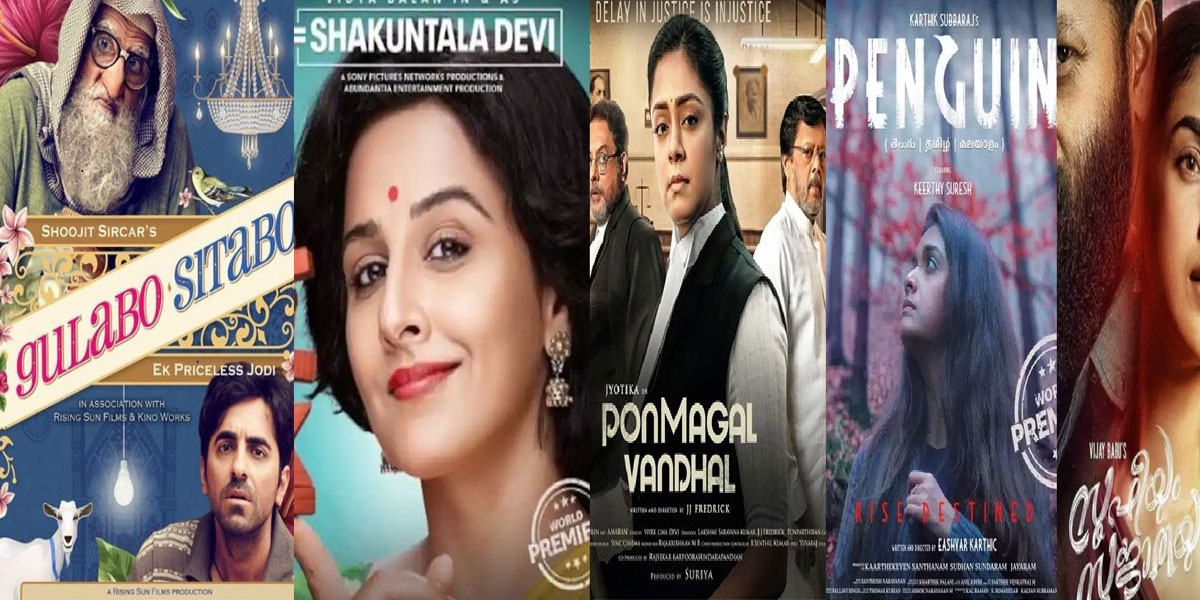 From Theaters To Phone: 5 Movies That Are Going To Be Released On OTT Platforms

With cinemas shut down all over the country, producers have decided to release their movies on digital platforms. As cinemas come nowhere near the list of essential services, their re-opening date is unknown.

So, producers of mainstream Bollywood movies and South Indian movies found it more convenient not to wait but release their movies on OTT platforms.

The viewers might be happy by the move, but exhibitors and distributors are condemning this shift. They fear that if this becomes a trend, they might go bankrupt till the lockdown is lifted up.

Nevertheless, here is a list of 5 movies that are coming straight into your phones, before hitting cinemas.

Amitabh Bachchan and Ayushmann Khurrana starrer Gulabo Sitabo is directed by Shoojit Sircar. It is the first movie that has changed its route from cinema halls to the OTT platform. Sircar said that he is happy that the film will have such a wide range of audiences. Amazon Prime will release the film in more than 200 countries.

The biopic of Indian Mental Calculator Shankutala Devi features Vidya Balan as the lead. Anu Menon, the director of the film, said that it is crucial to watch the movie, as talk about equality is the need of the hour. Just like Gulabo Sitabo, this movie is going to be released on Amazon Prime Video.

Tamil Nadu Theatre and Multiplex Association condemned the move and created drama (no pun intended) when the producer announced that they are going to release the movie on Amazon Prime Video. Tamil actor Suriya’s home production is backing the film, and the lead role is played by Jyothika.

The poster of Penguin attracted the audience’s attention as it showed award-winning actor Keerthy Suresh with a baby bump. The film is directed by Eshavar Karthic and is set to be released on Amazon Prime Video on June 19.

Following the lead of Tamil, Telugu and Hindi films, Sufiyum Sujatayum will the first Malayalam movie to be released on the OTT platform instead of cinemas. Only little is known about the movie, except that it is a musical drama and is directed by Naranipuzha Shanavas, who has directed the much-acclaimed film Karie.

Make sure you buy a large packet of popcorn as it is only the start of a big shift from Cinema to OTT. A few Kannada movies like Law and French Biryani are also in the pipeline of OTT platforms.

Another Blow For Bollywood: Rishi Kapoor Passes Away At 67